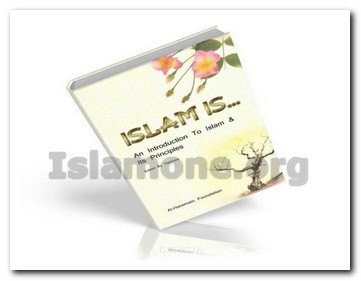 The Arabic word Islam literally means ‘surrender’ or ‘submission.’ Islam, as a faith, means total and sincere surrender to God so that one can live in peace and tranquility. Peace (Salam in Arabic, Shalom in Hebrew) is achieved through active obedience to the revealed commandments of God, for God is The Just, The Peace.

The Oneness of God in His Lordship (Omnipotence) 8

The Devotion of All Worship to the One God Alone 9

The Six Articles of Faith 14 Belief in God 14

Belief in His Angels 14

Belief in His Books 15

Belief in His Prophets and Messengers 16

Belief in the Day of Judgment 18

The Free Will of the Human Being 21

There Is No Compulsion in Religion 22

The Five Pillars of Islam 23

The Declaration of Faith (Shahadah) 23

Making the Pilgrimage to Makkah (Hajj) 26

The Dangers of Innovations in Islam (Bid’ah) 34

Male Chauvinism and the Muslim World 51

For Beginners
24 Files By Islam ONE

Women-Islam_vs_women-Jews-Christian
36 Files By Islam ONE

Dua
5 Files By Islam ONE

Aqeedah
13 Files By Islam ONE
View All (10)
Home
›
Files
›
For Beginners
›
Islam Is…: An Introduction To Islam & Its Principles
Invite a Friend About Us Privacy Terms FAQ Contact Us Language (en)
Select Language

Русский
© 2021 Islam Awareness Organisation | from H A L A L W E B | Made with Love in Germany |
Are you sure?
Please, enter a value here