The following sheds light on the origin of the Muslim greeting “Assalamu Alaikum” (peace be upon you.)

As-salamu alaykum Arabic: السلام عليكم‎) is a Muslim greeting and parting expression. It is Arabic and translates to "Peace be upon you."

The greeting is regularly exchanged during Muslim lectures and sermons.The typical response to the greeting is "Wa-Alaikum-us-Salaam" ("and upon you the Peace"). 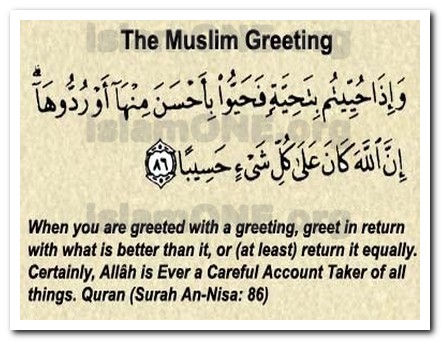 The Prophet said, “Allah created Adam in his image, sixty cubits (about 30 meters) in height. When He created him, He said (to him), ‘Go and greet that group of angels sitting there, and listen what they will say in reply to you, for that will be your greeting and the greeting of your offspring.’ Adam (went and) said, ‘As-Salamu alaikum (Peace be upon you).’ They replied, ‘As-Salamu ‘Alaika wa Rahmatullah (Peace and Allah’s Mercy be on you).’ So they increased ‘wa Rahmatullah’ The Prophet added, ‘So whoever will enter Paradise, will be of the shape and picture of Adam. Since then the creation of Adam’s (offspring) (i.e. stature of human beings) is being diminished continuously up to the present time.” (Sahih al-Bukhari, Volume 8, Book 74, Number 246)

‘His Image’ means that Adam has been bestowed with life, knowledge, power of hearing, seeing, understanding, but the features of Adam are different from those of Allah, only the names are the same, e.g. Allah has life and knowledge and power of understanding, and Adam also has them, but there is no comparison between the Creator and the created thing. As Allah says in the Quran: “There is nothing like Him, and He is the All-hearer, the All-Seer”(V42.11), Allah does not eat or sleep, while Adam used to eat and sleep [More details in Fath Al-Bari, vol.6. page 108,9 and vol.13, page 238,9]. Source: (Tafsir by Dr. Muhammad Taqi-ud-Din Al-Hilali, and Dr. Muhammad Muhsin Khan, P: 123)

The phrase Assalamu-Alaikum is also very useful in icebreaker situations when mending relationships. The Prophet (peace and blessings of Allah be upon him) said: “it is not permissible for a man to forsake his Muslim brother for more than three days, each of them turning away from the other when they meet. The better of them is the one who gives the greeting of salaam first.” (Narrated by al-Bukhaari, 5727; Muslim, 2560). This applies especially if the believer is a relative because forsaking relatives is an even greater sin.

So, if you are in a situation where you have not spoken to a Muslim for more than three days due to an argument or other squabble, ‘Assalamu-Alaikum’ can help you take the first step toward mending that relationship.